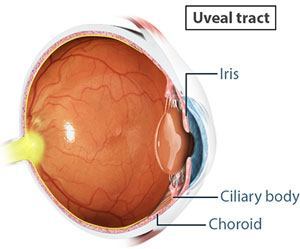 Toxoplasmosis is an infection of the posterior uveal tract caused by a Protozoan organism, commonly called a parasite.

The uveal tract is made up of the Iris, Ciliary Body and Choroid. Because the choroid is the thin vascular structure that nourishes the retina, the retina too will be affected, which is why this disease can be called toxoplasmic retinochoroiditis.

How is it contracted?

The Protozoan parasite needs a intermediate host, and the most common is the cat. Other animals such as mice and livestock and then of course humans can become hosts.

Humans can become infected in a number of ways:

1. Eating of undercooked meat (beef, lamb, pork)
2. Contamination on hands when disposing of cat litter trays or soil in which cat refuse has touched.
3. Transfer to foetus from a mother who has contracted the parasite whilst pregnant.

Can it be treated?

The course of the disease can vary according to many different factors, which include:

1. The strength of the individual’s immune defence systems.
2. The size of the lesion.
3. Use of antimicrobial drugs

The inflammation in the eye can heal in a strong patient within 1-4 months. However left behind is a scar on the retina that can not be treated as that part of the retina has been lost. However this condition can take up to 2 years to be treated despite of intensive therapy.