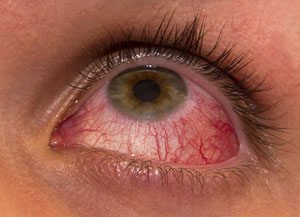 What is Sympathetic Ophthalmia?

Sympathetic Ophthalmia is a rare inflammatory condition that affects both eyes. It usually occurs following a penetrating injury to one eye, resulting from trauma or surgery. The symptoms of the ocular inflammation in the uninvolved eye become noticeable usually within 3 months after the injury but may develop from days to several years later.

What are the symptoms?

The symptoms of sympathetic ophthalmia include floating spots, reduced vision, pain in both eyes and increased sensitivity to light.

What are the signs?

A clear record of past penetrating trauma or surgery to one eye followed by an inflammation is suspicious. An eye examination can reveal features such as a severe reaction in the anterior-chamber (front part) of both eyes with large greasy appearing deposits on the cornea (mutton-fat keratic precipitates), white-yellow lesions called Dalen-Fuchs’ nodules in the choroid (a blood-filled layer which provides oxygen and nutrients to the retina and lies between the retina and the sclera) and thickening of the uveal tract (middle layer of the eye).

A complete ophthalmic examination including a dilated examination of the retina is required. Blood tests and a chest radiograph may be requested to rule out other conditions such as tuberculosis or sarcoidosis. A fluorescein angiography or ultrasound of the eye (B-Scan) may be useful in confirming the diagnosis.

The cause is not clearly understood, however it is thought that an injury to one eye somehow programs the body to produce an autoimmune inflammatory response against certain parts of the eye. It seems that the eye injury brings eye tissues in contact with the bloodstream which excites the immune system. This produces antibodies which are the body’s defense proteins. The body produces antibodies against antigens which are recognised as foreign proteins. Normally the eye tissues are separated from the bloodstream, however following an eye injury, blood mixes with eye tissue. The antibodies are wrongly directed against eye tissue antigens. It is also thought that certain microorganisms may contribute to the cause of sympathetic ophthalmia.

Sympathetic ophthalmia may be mistaken for Vogt-Koyanagi-Harad Syndrome (VKH), as they are very similar. Both are a form of inflammation (uveitis) occurring in both eyes with similar clinical features. Other similar conditions include endophthalmitis, sarcoidosis, and syphilis.

How can sympathetic ophthalmia be prevented and treated?

Sympathetic ophthalmia is a rare but serious condition that may result in poor visual outcome without therapeutic intervention. However, when treated early and appropriately, there is a good chance of controlling the inflammation and retaining useful visual function.

Immunosuppressive therapy
If corticosteroids are ineffective or produce intolerable side effects, additional therapy may be required. Treatment may involve immunosuppressive agents including antimetabolites and T-cell inhibitors.

(1) Anti-metabolites
Anti-metabolites are a group of anti-cancer drugs which prevent cells growing and dividing. Drugs of this type include azathioprine and methotrexate. Methotrexate is an immunosuppressive medication that is capable of blocking the metabolism of cells and therefore interferes with the normal division and function of cells. It has been helpful in treating diseases associated with abnormally rapid cell growth and has also been helpful in treating inflammatory diseases.

(2) T-cell Inhibitors
These agents inhibit a group of cells (T-lymphocytes), which play an important role in the immune system and contribute to the development of autoimmune diseases. Cyclosporine is a strong immunosuppressant drug that works by reducing the activity of the immune system.

Note: Long-term follow-up is essential due to the possibility of recurrence and the potential toxicity of therapeutic agents.