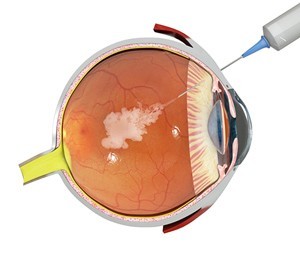 What Is Macular Degeneration

Macular degeneration is the degeneration of the central part of the retina (macula), which is responsible for central vision and can cause loss of vision. There are 2 types of macular degeneration: the “dry” type and the “wet” type. The dry type is generally caused by aging and thinning of the macular layers and results in a gradual loss of vision. The wet type involves growth of abnormal blood vessels in the retina. These blood vessels are fragile and can leak fluid and blood, causing scar tissue to form behind the eye, and can lead to damage of the macula. This affects central vision, which is required for daily activities, causing distorted and blurred vision. The degeneration may result in vision loss that is quick, severe and permanent.Treatment of macular degeneration (AMD) does not cure the disease but aims to stabilise the disease process and maintain the best vision for as long as possible.

There is no treatment available for the dry form, however a major national eye institute study (AREDS) reported benefits of certain nutrients such as zinc, Lutein, Vitamins A, C and E, indicating they may be valuable in slowing down the progression of dry macular degeneration. There is no cure for AMD, and the current treatments are unable to completely restore lost vision, however some treatments may delay the progression of the disease, stabilise or reduce the rate of vision loss, or even improve vision. Treatment methods include: Transpupillary Thermotherapy, Photodynamic Therapy, Intravitreal Triamcinolone and Retaane.

Lutein and zeazanthine are plant chlorophyll “helper” molecules or carotenoids, which green plants use to soak up excess light energy which could otherwise damage their chlorophyll molecules during photosynthesis. Much in the manner of oxygen becoming “singlet free Oxygen” in humans, which is a free radical atom that seeks to react aggressively with our cellular molecules and cause damage, so also chlorophyll in plants exposed to excess light can become triplet chlorophyll which has the capacity to damage the plant’s cellular molecules. Xanthophyll and its precursor zeaxanthine are lutein type plant pigments which buffer this excess light energy, exposing themselves to the light and absorbing it.

Click here to know more about Nutrition for Macular Degeneration.

Intravitreal triamcinolone (IVT) is a steroid medication that is injected into the vitreous cavity of the eye. It is typically used to reduce swelling and inflammation inside the eye and is used to treat eye conditions such as cystoid macular oedema, diabetic macular oedema and some cases of wet AMD. Most patients who receive this injection see floaters in their vision for up to 3 weeks. Unlike the use of steroid tablets, which are associated with weight gain, increased blood pressure, osteoporosis, diabetes and stomach ulcers, the use of small doses of steroid administered directly into the eye is thought to limit the risk of side effects. The main problem with IVT is that its effect usually lasts only 3 to 6 months, but also it can raise the pressure inside the eye.

Retaane is an injection for the treatment of wet AMD. The active substance in Retaane is Anecortave and it is similar in structure to cortisol, which is a natural hormone in the body. It is able to stop or slow down the development of new blood vessels by interfering with the production of the proteins needed to build the vessels, and the growth factors needed for the blood vessels to spread. Retaane is not injected into the vitreous of the eye, but instead it is deposited behind the eye, along the white part of the eye (the sclera). It is delivered as a depot injection, a type of injection where the medicine is prepared in such a way that it is absorbed very slowly. This method of delivery avoids the risk of intraocular infection and retinal detachment, which are the most common side effects associated with injecting therapeutic agents directly into the eye. Retaane depot requires less frequent administration, once every six months compared to some other eye injections used to stop the growth of blood vessels that are used as often as 9 -12 times a year. Unlike other treatments, there have been no reports of drug-related elevation of eye pressure or cataract formation. According to an independent safety panel, no clinically significant side effects have been associated with Retaane depot treatment.