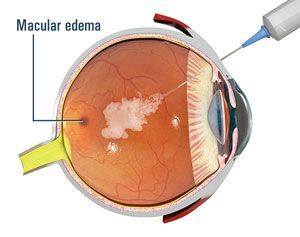 Researchers at Sydney Eye Hospital were amongst the first in the world to suggest the use of steroid injections into the eye as a way of closing down a leaking blood vessel without destroying the overlying retina. This technique, intravitreal triamcinolone, is now commonly used. The advantage is that it is a quick way of stabilising the vision with relative safety. There are, of course, possible complications of any medical procedure. Intravitreal triamcinolone injection is no exception. However, these problems are rarely serious and there are strategies to deal with them if they occur. The biggest problem with intravitreal triamcinolone is that it does not last and its effect usually wears off after three to six months.

Injection of triamcinolone into the vitreous jelly of the eye has been used as a treatment for cystoid macular oedema in uveitis. In this condition fluid builds up in the macula, the central part of the retina, due to the inflammation of the uvea, which is the internal lining of the wall of the eye. This condition has typically been treated with steroid tablets but the problem is the high incidence of side effects of steroid tablets, which include weight gain, increased blood essure, osteoporosis, and development of diabetes and stomach ulcers. The use of very tiny doses of steroid administered to the inside of the eye limits these side effects as the steroid is administered exactly where it is required. Steroids may also be used by injection around the eye outside the wall of the eye in the orbit or in the fat of the eye socket. However, because the steroid does not gain access to the uvea, their effect is possibly less than if injected into the vitreous jelly. It should be remembered that steroids given by other routes such as tablets or injections around the eye socket may cause similar complications.

In a report “Safety and Efficacy of Intravitreal Triamcinolone for Cystoid Macular Oedema in Uveitis” (Young, S, Larkin, G, Branley, M, Lightman, S (Clinical Experimental Ophthalmology 2001 February; 29(1):1) patients achieved complete solution of cystoid macular oedema for varying periods of time up to six months after the injection. The problem was that there was a rise in intraocular pressure in some of the patients that required further therapy. However, there was marked improvement in vision with this treatment.

How is intravitreal triamcinolone administered?

This procedure may be done under topical anaesthetic (eye drops) in the rooms. A tiny needle is inserted for a few seconds into the white of the eye and the drug is injected into the vitreous jelly. It is slightly painful but no more than having an injection in the arm. The drug is visible to the patient floating around in the patient’s field of vision for about three weeks. It then dissolves and it continues to exert its influence for at least that length of time. The patient is at risk of complications from
the treatment and these include:

Of these, glaucoma is the most likely occurring in large enough numbers to warrant post-operative pressure checks. However, a slight rise in intraocular pressure does not necessary cause the disease of glaucoma and can usually be managed by eye drops to bring the pressure back down again. Only rarely does glaucoma result.

Note: Should the patient have bad pain in the eye after the injection, it is imperative that this be reported to the Eye Doctor as quickly as possible as it might indicate infection.

The eye does not need to be padded after the procedure and to the patient’s friends and relatives there is no apparent change in the appearance of the eye although occasionally the white chalky drug may be visible like a cat’s eye reflex taken on nighttime photographic film. Again this only lasts for about three weeks.

In addition, work in laboratories has shown that other eye diseases such as branch retinal vein occlusion and diabetic proliferative disease may be inhibited by intravitreal triamcinolone. However, these results rely on animal studies and have
not been confirmed in human patients as yet. (Ophthalmology 1996 December; 103(12):2099).

In another study by the ophthalmic group at St Thomas’ Hospital, London, intravitreal triamcinolone was shown to completely restore the microanatomy of the macula, the central part of the retina, within one week after the injection of steroid. They used a machine called an “Optical Coherence Tomographer” to optically study the small cystic spaces developing in the macula and these were found to disappear after the injection. However, the affect only lasted from three to six months. Antcliff, RJ, Spalton, DJ et al, Ophthalmology 2001 April; 108(4):765.

The same technique has been used in retinal detachment where scar tissue has started to involve the detached retina. Similarly, in advanced proliferative diabetic retinopathy, reports of triamcinolone have shown promise (Jonas, JB et al American Journal of Ophthalmology 2001 April; 131(4):468-71).

The original work on this drug was done by the Sydney Eye Hospital Group where Dr Philip Penfold and Professor Frank Billson and others wrote the seminal papers on the use of intravitreal triamcinolone in macular degeneration. It was found that the triamcinolone effected small but significant improvement in vision lasting up to six months. It was not known exactly why this occurred but it may have been due to the immuno-modulatory effect of the steroid drug. (Clinical and Experimental Ophthalmology 2001 June; 29(3):188)

Why should you have regular eye examination?

Regular medical eye examinations are very important for everyone, as eye disease can occur at any age. Often the patient does not realise symptoms unless the disease has done damage. Therefore, if diagnosed and treated by an ophthalmologist early, most blindness is preventable.